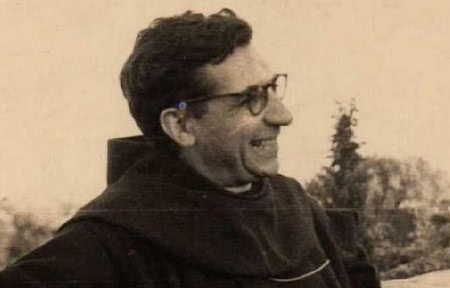 Blessed Father Gabriele Maria Allegra was an Italian Franciscan priest, who translated the entire Bible into Chinese for the first time and who was also a student and YCW chaplain in Singapore.

Born on 26 December 1907, Blessed Father Gabriele Maria Allegra was an Italian Franciscan priest, who translated the entire Bible into Chinese for the first time and who was also a student and YCW chaplain in Singapore.

Venerable Allegra and his colleagues published the Chinese Bible in 1968, three years after Vatican II promulgated Dei Verbum (Dogmatic Constitution on Divine Revelation), which stated that “easy access to sacred scripture should be provided for all the Christian faithful.”

The Studium Biblicum version, considered to be the most faithful to the original manuscript, is still the main Chinese version used today, ucanews.com says. “Its publication had a far-reaching significance for the promotion of biblical ministry in Chinese-speaking Catholic communities around the world,” said Chui, who also serves as liaison secretary for the Biblical Servicing Center of the United Chinese Catholic Biblical Association.

Born “Giovanni Stefano Allegra” in San Giovanni la Punta, in the province of Catania, Sicily, in 1907, the future blessed friar entered the Franciscan minor seminary in Acireale in 1918, and the order’s novitiate in Bronte in 1923. Three years later he was sent to Rome to study at the Franciscan’s International College.

In 1928, Allegra felt inspired to devote his entire life to the translation of the Bible into Chinese. That inspiration came while he was attending the 600th anniversary celebrations for another Franciscan, Giovanni di Monte Corvino, the man who first attempted to translate the bible into Chinese. Allegra spent most of the next 40 years of his life on that arduous task.

Thus, after being ordained priest in 1930, he set sail for China. He arrived in Hunan, southern China, in July 1931 and there started studying Chinese and with the help of professors prepared a first draft translation around 1937. Due to fatigue, he had to return to Italy for 3 years, but there continued his biblical studies.

He tried to return to Hunan in 1940 but could not do so due to the Sino-Japanese war and so had to go to Beijing. On that journey he lost his original draft translation and had to start all over again once he arrived in the Chinese capital. There, in 1945, he established the Franciscan Biblical Study Centre (Studium Biblicum Franciscanum), but when the Communists came to power in 1949 he and his team had to move to Hong Kong, where he lived for most of the rest of his life.

On Christmas Day, 1968, Father Allegra, he achieved his life’s ambition when the first one-volume Bible was published in Chinese. Known as the “Studium Biblicum” version, that is still the main Chinese text today and is considered to be the most faithful to the original manuscript.

Then in 1975, the Chinese biblical dictionary was published. While most of his life had been devoted to biblical scholarship and this all important translation, Allegra nevertheless found time also to help the poor, the sick, victims of war and lepers.

Blessed Allegra lived at St Anthony Friary, adjacent to St Mary of the Angels Church in Singapore, from 1961-63, writes Liu Ying at ucanews.com.

"His portrait was placed at a side of the altar, near the tabernacle. Parish priest Father John-Paul Tan, a Franciscan friar, announced the news of the beatification and introduced the life of Fr Allegra to more than a thousand people in his Mass homily. “We are also blessed, because here we are part of the history,” he said.

According to the parish’s monthly bulletin, Blessed Allegra was among an international group of friars who ran a sociological center whose “primary role was to translate the Church’s social teachings into the Chinese language in a bid to counter the Communist insurgency of the late 1950s.”

Their other duties included chaplaincies at a university and the Young Christian Workers’ Movement, giving retreats and bible courses, as well as the pastoral care of the Catholic population in the area.

Blessed Allegra left Singapore for Hong Kong to continue his biblical translation work in 1963 and the center was relocated to Taiwan in 1970."

After 10 years, Venerable Allegra is to be beatified (ucanews.com)
Gabriele Allegra (Wikipedia)