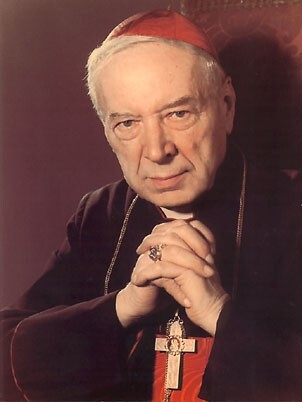 Polish Cardinal Stefan Wyszynski founded the JOC in his home diocese of Wlocawek in 1932. He later authored a book on the theology of work.

Born in Zuzela, Poland, in 1901, Stefan Wyszynski became a priest for the Diocese of Wlocawek in 1924.

After his ordination he studied canon law and social sciences at the Catholic University of Lublin.

He first encountered the JOC and Cardijn while studying in Rome in 1929-30, which coincided with the first jocist pilgrimage to Rome in September 1929.

After he returned to Wlocawek, in 1932 he founded the Katolickie Stowarzyszenie Mlodziezy Robotniczej - the Young Catholic Workers Association, which followed the principles and methods of Cardijn's JOC.

The JOC barely existed outside of Belgium, France and one or two other francophone countries by 1930, which makes the Polish JOC one of the earliest in the world to go beyond this zone.

It appears that Fr Wyszynski again heard Cardijn speak at the Pax Romana Congress in Bled, Yugoslavia in 1938 where the JOC founder was the keynote speaker. Indeed, Wyszynski later published a report of the conference in which he cited Cardijn.

In light of this, it is also easy to discern a Cardijn influence in the very title of Wyszynski's book on "Work and the sanctification of daily life" and in his other writings.

During World War II, he became a chaplain to the Polish Resistance.

In 1946, he was appointed bishop of Lublin. Two years later in 1948 he became archbishop of Gniezno and Warsaw. Pope Pius XII made him a cardinal in 1953.

Between 1953 and 1956, he was both imprisoned and subject to house arrest by the communist regime.

He attended the second, third and fourth sessions of Vatican II. In 1965, he addressed the Council on religious liberty, the same day that Cardijn also spoke on the same issue.

In 2019, Pope Francis approved the miracle necessary for his beatification, which is now scheduled to take place on 12 September 2021.