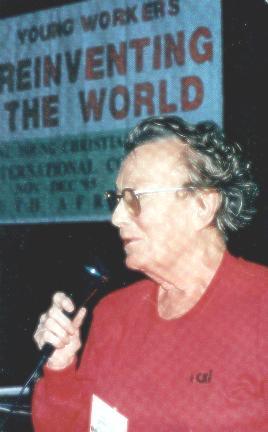 Pioneer of the JOCF in Belgium, Marguerite also worked fulltime for the JOC Internationale for 12 years before becoming Cardijn's personal secretary.

Marguerite Fiévéz was born on 1 June 1914 at Amay-sur-Meuse in Belgium. Her father was a medical doctor who specialised in work injuries and diseases and who also helped launch the work orientation service of the early JOC. Her mother Louise Pire was an activist in the Ligue ouvrière chrétienne féminine (Christian women workers league).

After initially joining the JECF, she moved into the JOCF and became a fulltime worker from 1933.

In 1934, she became a member of the national team.

During World War II, she became a refugee in Belgium and became a member of the national team of the French JOCF in the "free zone" of occupied France.

Returning to Belgium, she joined the religious congregation the Hospitalières du Sacre Coeur (Hospitallers of the Sacred Heart).

In 1945, she left the congregation to join the International Secretariat of the IYCW, where she remained as secretary until 1957.

Following the First World Council in 1957, she completed her work for the IYCW and became the personal secretary of Cardijn.

She also became a member of executive committee of COPECIAL, the Preparatory Committee for International Lay Apostolate Congresses, and took part in organising the 1967 Congress in Rome.

During Vatican II, she collaborated closely with Cardijn, including in the compilation of his book, Laïcs en premières lignes.

In 1966, she became a member of the Pontifical Council for the Laity.

After Cardijn's death, she catalogued his archives and later those of the IYCW.

She also wrote several historical books, including a biography of Fernand Tonnet, as well as contributing to a history of the Belgian JOC.

She died on 5 June, 2000, just days after the International Colloquy on YCW History.