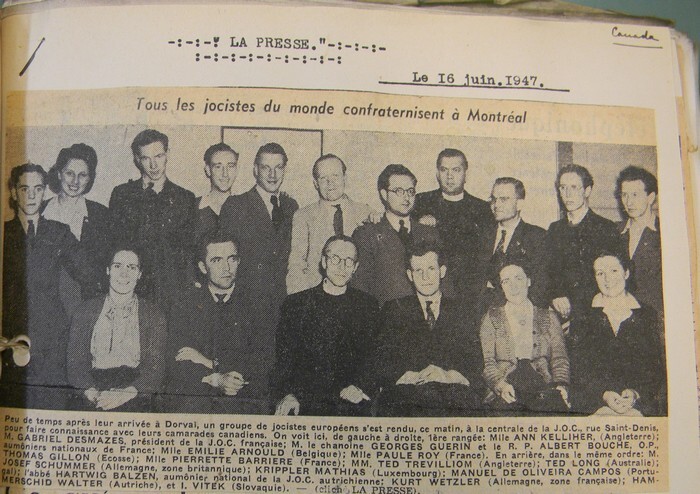 Early leader of the Australian YCW and later a founder of the YCW Cooperative and pioneer of the cooperative movement in Victoria, Australia.

In 1921, Ted Long was born into a farming family at Knowsley near Bendigo and, after education at the local State School and later at St Patrick’s Ballarat, he moved as a young man to Kensington, an inner suburb of Melbourne. Employed in the Commonwealth Department of Air, he joined the newly formed Young Christian Workers Movement (YCW) where he became not only involved in the many sporting services available but moved through the ranks of the YCW to become National President.

When his good friend Frank McCann took ill, Ted assumed the role of National Secretary in 1943, giving up his public service career and also abandoning his VFL football pursuits having played about 10 games with North Melbourne.

In 1942 the YCW conducted an enquiry into the needs of young workers revealing a need for financial support in the purchasing of homes and household goods and services.

The YCW Co-operative Trading Society was formed in 1948 with Ted Long assuming the secretarial duties in 1951. This Society went on to provide household furniture and white goods, insurance and later school furniture and clothing.

Also in that era, influenced by the work of the Antigonish Movement of Nova Scotia Canada, the YCW Housing and Trading Co-operative personnel investigated consumer finance co-operatives. As a result, the YCW Central Credit Union was formed in 1952 and became the first co-operative credit society to be registered under the Co-operation Act of 1953.

This Association, in addition to acting as an advisory and representative body, offered a central bank function to its member societies as well as insurance and a fledging stabilisation fund.

Ted travelled through out Victoria promoting the formation of co-operatives in the 1950s and 1960s. His polite, mild mannered, yet determined personality helped to make many friends and inspire others to continue his work.

In 1961 Ted Long was the foundation secretary of the Co-operative Development Society, formed to develop educational programs and promotional materials for all forms of co-operatives.

He was awarded an Order of Australia Medal in 1984.Ted also attended the first post-war international congress of the YCW held in Montreal, Canada in 1947.

- Leon Magree wrote the above tribute to Ted Long, who was farewelled at St Thomas the Apostle Church Blackburn on 11th September 2008 in the presence of over 400 friends and family.