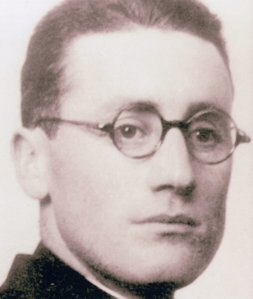 JOC and Catholic Action chaplain in the Basque town of Arrasate/Mondragon and founder of the Mondragon Cooperatives.

Fr José María Arizmendiarrieta Madariaga was born in the Iturbe estate of the Barrio de Barinaga in Markina, Biscay, in Spain's Basque province at 1pm on 22 April, 1915.

In 1928, aged twelve, he began his minor seminary studies in Castillo-Elexa-beitia.

He served as a journalist in the Basque Army.

Taken prisoner after the fall of Bilbao (in the Larrinaga jail), and found guilty in the briefest of proceedings of military rebellion, he narrowly escaped the death penalty.

Eventually, he was later cleared of the charges and transferred to the nationalist ranks in Burgos.

When the war ended, he returned to the Seminary of Gasteiz/Vitoria to be ordained a priest on 21 December, 1940.

He had hoped to study sociology at the University of Louvain but his bishop decided otherwise, posting him to the town of Arrasate, known in Spanish as Mondragon.

Six weeks later, he arrived at Mondragon, where he remained until his death.

He divided his activities at Mondragon into three periods:

1941 - 56: Youth, including as chaplain to the JOC, and other specialised Catholic Action movements (HOAC or Christian Workers Movement).

One of Fr Arizmendi's earliest initiatives was the founding, together with leaders of the JOC and Youth Catholic Action, of a technical school (Escuela Profesional) that he regarded an initial platform for emancipation.

He later wrote: "The Technical School is the strategic instrument, the primary platform of emancipation. It works with groups of people who are already active in movements linked to the Church: Young Christian Workers (YCW or JOC), Catholic Action Youth and others. Achieving consciousness is the basis of commitment, the germinal point for the transformation of structures, the workhorse of every society in the midst of change."

In 1956, he founded the first worker cooperative, known as Ulgor, after the initials of the founding workers.

In 1959, Fr Arizmendi and his team founded a cooperative bank, the Caja Laboral, that would become a key tool in the expansion of the Mondragon cooperatives.

Pope Francis approved the decree of the Congregation for the Causes of Saints recognising the "heroic virtues" of Servant of God José Maria Arizmendiarrietta on 17 December 2015.