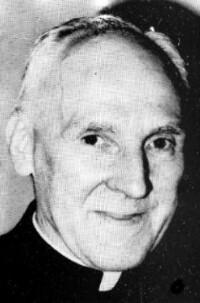 Cardinal Gabriel-Marie Garrone was an important promoter of Specialised Catholic Action as a seminary professor and later as archbishop of Toulouse and at Vatican II.

He was ordained on 11 April 1925 for the Diocese of Chambéry where he began teaching in the Major Seminary soon after.

He was mobilised during World War II, captured and remained a prisoner until 1945 when he returned to the Major Seminary.

He was ordained coadjutor archbishop of Toulouse in 1947 and finally succeeded Archbishop Saliège in 1956.

In 1958 he published the short book L'action catholique, son histoire, sa doctrine, son panorama, son destin in response to an article by Bishop LJ Suenens of Malines-Brussels, questioning the notion of Catholic Action. He also published a number of articles in the journal Masses ouvrières.

He was vice-president of the Bishops Conference of France from 1964-66.