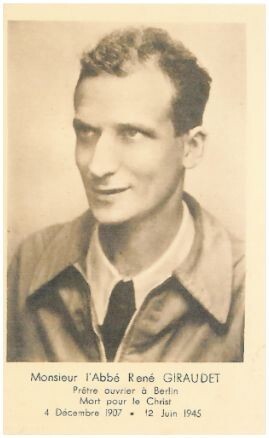 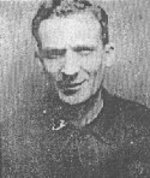 René Giraudet was a French Paris Foreign Mission priest who volunteered to serve in Germany under the compulsory labour service regime leading to his arrest for acting as a priest and eventual transfer to Bergen-Belsen and later his death.

Born at Luçon in the Vendée region on 4 December 1907, René Giraudet was ordained as a Foreign Missions (MEP) priest on 5 December, 1930.

Although he had wanted to go to the Far East, his health forced him to return to the diocese of Luçon, where he worked as a curate, then parish priest in St Hilaire du Bois.

Responding to the call by Cardinal Suhard of Paris for volunteers to leave for Germany to assist the STO compulsory labour service workers, he requested permission from his bishop to go to Germany as chaplain.

He travelled there as a clandestine priest under the guise of being a voluntary worker.

He was employed in Berlin at the Deutscher-Verlag publishing house where he worked on distribution of printed matter. Later he beame a metal worker and inspector at AEG.

Continuing to act secretly as a priest, he regularly held confessions, communions, recollections and baptisms.

After his priestly identity was discovered, he was arrested by the Gestapo on 12 June 1944 under the Nazi decree of 3 December 1943 repressing Catholic action among French workers in Nazi Germany.

He was imprisoned at the Alexander-Platz prison.

He was deported on 23 September 1944 to the Oranienbourg-Sachsenhausen concentration camp where he was given N° 104467).

Subsequently he was transferred to Bergen-Belsen, where he contracted typhus. On 15 April 1945, the camp was liberated by American troops and was repatriated by medical plane to France.

He died on 12 June 1945 at the Kremlin-Bicêtre hospital in Paris and is buried in St Hilaire-au-Bois.