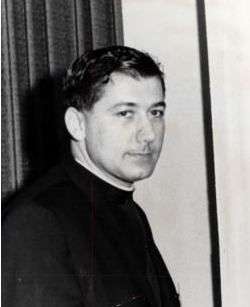 Victor Salandini was a Californian priest who was chaplain to the YCW and worked closely with Cesar Chavez.

Fr Victor P. Salandini was best known as a friend and collaborator of Cesar Chavez and an advocate of the California farm laborers' cause but he was also a YCW chaplain in the San Diego diocese. He became known as the 'tortilla priest' because he used Mexican style cornbread to celebrate the Eucharist leading to his suspension by his bishop.

The only son of a farmer, Victor Paul Salandini was born August 12, 1927 in Escondido, California. From age twelve until his 1952 ordination as a Catholic priest, Salandini spent every summer working as a laborer in the fields. His first appointment as curate (1952-1954) to the Rev. Leo L. Davis of the Immaculate Conception Church, a Mexican American parish in San Diego, allowed him the opportunity to bring his personal experience as a field worker into the forefront of his ministry's concern. In 1953 Fr Davis founded the United States' first Cardijn Center, a predominantly lay organization dedicated to the social doctrine of the Church. Fr Salandini headed a Cardijn Center sub-group, the Young Christian Workers, whose aim was "to restore Christian dignity to the world of work." He later wrote that "the Cardijn Center has given my priesthood meaning."

The Diocese of San Diego, as well as his parishioners, praised Salandini's efforts. As an assistant pastor (1954-1957) to two San Diego Mexican American parishes and as Pastor (1957-1962) of Our Lady of Guadalupe Church, El Centro, California, Fr. Salandini worked to develop Christian leadership in young men. In a rural Mexican American parish this concern soon fed into a ministry supporting the migrant laborer. From 1957 to 1962 Fr Salandini was chaplain to 6,000 braceros (migrant workers) in the Imperial Valley.

In addition to his religious duties, he tried to improve conditions in the migrant camps by showing weekly films and introducing other social activities; he also devised an effective system to safeguard the money which hundreds of workers sent their families in Mexico.

Church officials, however, were not pleased with his involvement and, according to Salandini, he was "silenced by the Diocese which felt that Church intervention at that time was not prudent." Fr Salandini was transferred to high-school teaching duties within San Diego.

While in San Diego, he completed his B.A. degree at San Diego City College (1962). He went on to receive an M.A. degree from St. Louis University (1965), writing a thesis entitled: "An Objective Evaluation of the Labor Disputes in the Lettuce Industry in Imperial Valley, California, during January-March 1961."

In 1964 the Diocese allowed Fr. Salandini to resume work as an assistant parish priest at Our Lady of Mount Carmel, a Mexican American parish in the rural border community of San Ysidro, California.

Upon his return to the San Diego area, Fr. Salandini, along with Cesar Chavez, the Rev. Wayne C. Hartmire (Director of the California Council of Churches Migrant Ministry) and eight striking grape-workers, was chained, jailed and tried for trespassing on DiGiorgio Corporation property after attempting to claim the strikers' confiscated goods.

After receiving his Ph.D. in 1969, Fr. Salandini was increasingly recognized as an authority on the California farm labor question. From 1969 to 1971, as the Research Director of the United Farm Workers Organizing Committee, he travelled across the United States and Canada to lecture and inform the public.

Fr. Salandini continued to pursue his more controversial labor activities as well, stating he was "merely following papal social doctrine that a priest be concerned with the needs of the poor."

In 1965 be began serving as a part-time chaplain for Chavez and union farm workers. Salandini's ministry reached its climax in 1971 when San Diego Bishop Leo T. Maher suspended him for refusing to wear vestments other than a burlap serape emblazoned with Chavez's stylized eagle and for distributing corn tortillas as communion bread

Diocesan officials accused "the tortilla priest," as Salandini came to be known, of "scandalous disobedience" for using his religious status as a political weapon. They also charged that he harassed the owners of picketed farm operations by holding daily masses in defiance of a court injunction. Bishop Maher later reinstated Salandini, and he returned to his academic career as associate professor of labor economics at Fresno State College.

(Adapted from Online Archives of California)