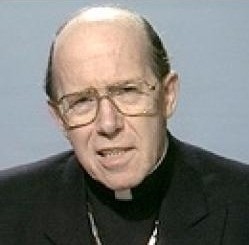 Derek Worlock was an English priest, who worked closely with the YCW. He was a peritus at Vatican II and later the archbishop of Liverpool.

Derek Worlock was born in London on 4 February 1920.
He studied at St Edmund's College from 1934 to 1944. By this time the family home was in Winchester. As a small boy he was rebuked for "having an answer to everything", a trait that remained.

He was ordained to the priesthood at Westminster Cathedral on 3 June 1944,] seminarians being exempt from military service so they could be rushed through to serve as chaplains. In theory he belonged to the Diocese of Portsmouth, but its bishop, William Timothy Cotter, expected his future priests to have an Irish background.

Not long afterwards, he was appointed private secretary to Cardinal Griffin, and assisted successive cardinal-archbishops of Westminster for almost two decades.

He attended every session of the Second Vatican Council between 1962 and 1965, initially as an expert in the Lay Apostolate Commission and as a Council Father for the final session.

Worlock was appointed Bishop of Portsmouth on 18 October 1965 and consecrated at the Cathedral of St John the Evangelist, Portsmouth on 21 December 1965. While in Portsmouth he set about renewing parishes, as well as undertaking the work of developing ecumenical relationships and the building of over thirty new churches in his diocese.

In 1976, he was appointed Archbishop of Liverpool.

The following year, he convoked at Liverpool the National Pastoral Congress which gave rise to the report The Easter People. Important events in his cathedral included the visit of Pope John Paul II in 1982 and the 1990 launch of the Council of Churches of Britain and Ireland. Worlock contributed to the work of reconciliation after the Toxteth riots in 1981 and in the aftermath of the football stadium tragedies at Heysel in 1985 and Hillsborough in 1989.[2]

Worlock was committed to evangelisation and collaborated with his fellow Christian leaders, as demonstrated by the books Better Together and With Hope in our Hearts which he and his Anglican counterpart in Liverpool, Bishop David Sheppard, jointly produced. Sheppard's daughter, Jenny, converted from Anglicanism to Roman Catholicism. In July 1992, Worlock underwent major surgery for lung cancer but survived long enough to celebrate the 50th anniversary of his ordination to the priesthood two years later.